Both studied at The Superior Institute of Art and Industry in Urbino between 1994 and 1998. After that, they took a study trip to important European cities ( Especially in London with Claudio Silvestrini). On their return to Italy, they set up a design studio in  Umbria  where they work in architecture, industrial and graphic design. Their  design thinking is strongly influenced by monastic areas consisting of light and material and by all spontaneous forms of rural architecture. New  designs are based on direct experimentation with materials, used both as a sensory and as an expressive tool. Current projects include interior design for  private residences, window dressing, communication projects and most af all, new collections for Scholtes and Binova kitchens.

Kitchen  of the Year YEAR 2008BO Bedre Magazine,  Denmark
2010 Second Best among the kitchens at the London Fair Grand Design, 2010 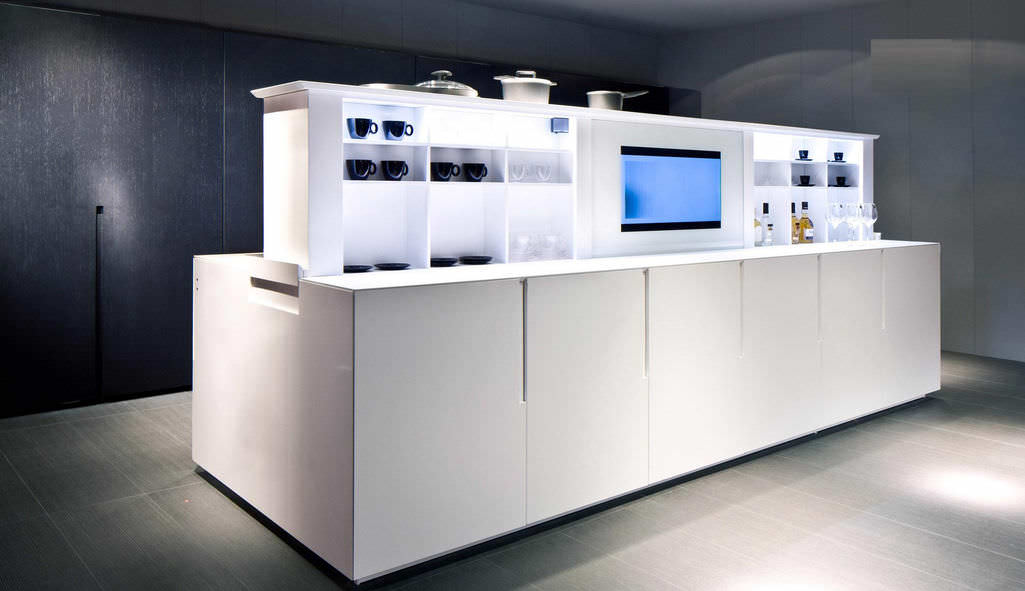 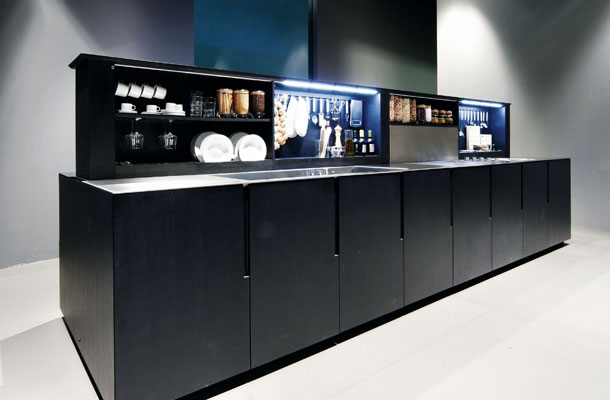 It all started more than 100 years ago, in 1907, with a cabinetmaking workshop in Thônes, in the French Alps, where various wooden objects were made, especially kitchen cabinets.
The workshop grew, and then in 1949 branched out, with the creation of the Mobalpa brand name and the first unit-based kitchens. Nowadays, Mobalpa has 3 production sites in France employing more than 1000 people.
The brand has already brought satisfaction to more than a million customers with fully customized kitchens.

Merge the impossible.A rich blend of white gold with the exoticism of wenge wood produces a kitchen that is quite out of the ordinary.

Accentuate contrasts.White lacquer and glossy black assert their differences for a kitchen of character.

The Totem of Refrigeration

Designer: Fabio Molinas
Nowadays, we’re obsessed with storing everything in the fridges, but this isn’t always the best option for keeping foods fresh… especially fruits and veggies. Some are better kept in a slightly warmer, more humid environment… and for these there’s the OLTU system. Using the refrigerator’s own heat output, clay containers are kept at the ideal temperature and humidity for the needs of various foods. The combination of containers and refrigerators creates a new, sustainable preservation system for a variety of veggies and fruits. The fridge produces heat which is distributed at the top through openings in the cap. This affects the three clay containers at the heart of the design. Over the containers are four trays where veggies that require room temperature will be placed. These veggies are then hydrated with the humidity produced by the evaporation of the lower containers. The containers are positioned so that heat affects each differently to create various temperatures in different chambers. The two cold containers are placed at the back while a warmer one is located at the front. The cold-dry containers interior is metal so food is cooled, but unaffected by the humidity. All the containers have external openings to allow breathing and each is easily accessible for the user.

FROM ALL ANGLES – NEW KITCHEN BY VON STURMER'S
Kitchen designer : Leonie von Sturmer, Von Sturmer's (Auckland)
Kitchen manufacturer : Neo Design
Cabinetry : Lacquered; walnut veneer
Even within the space of a decade a kitchen can become tired and dated, and in need of a total remodel. The original kitchen in this penthouse was a typical example, says designer Leonie von Sturmer. "It had a very closed-in feeling, which was not helped by dark muddy tones on the walls. The passageways and rooms are not overly wide and the apartment couldn't take the colour, or the dark timber cabinets. The entire space needed to be lightened and opened up."

The designer says the owners also wanted a much more functional kitchen, and it was important that the design take into account traditional Indian vastu shastra and Chinese feng shui principles. "The position of the key work stations was determined by both the traditional design philosophies and the need to work with fixed services," says Von Sturmer. "Right from the start it was clear we needed to open up the room, so we removed walls and a narrow door between the kitchen and dining area. This left a central column concealing mechanical services, which provided a base from which to cantilever a large island. This became the food preparation area – the island houses a dishwasher, small sink bins and wine refrigerator." The island also provides a laptop work area, and there is space for a television flush in the wall above the benchtop.

The cooking centre is contained within a stainless steel peninsula that allows the cook to face east as required by tradition. One side of the peninsula features a walnut bar top that provides a casual dining area. The chef can also access a bank of lacquered storage cabinets. The warm richness of the walnut veneer is juxtaposed with matt off-white lacquer to give definition to an otherwise understated colour scheme, says one of the owners. "We teamed these surfaces with marble benchtops, which are a preferred vastu material for kitchens. Although marble is not as hard wearing as granite or Corian and has a porous nature, the aesthetics and purity of this material made it a clear choice." -

Another work area is provided on the east side of the kitchen – this is the wet area, which features a large sink and a mirrored splashback that reflects light and the view opposite. A fourth area is the tea area in the southwest corner of the kitchen, where the heaviest items are placed traditionally. A cantilevered walnut, white marble and glass cabinet anchors this area, and creates a functional, eye-catching work station.

100% Design is the largest and longest running contemporary design event for industry professionals in the UK, with 27,111 visitors in 2013 (ABC pending). First staged in 1995, the show has been run by leading independent publishing and events company Media 10 since 2012.
Staged over 20,000m2 at London’s Earls Court Exhibition Centre, 100% Design is the commercial cornerstone event of the London Design Festival.
The award-winning layout of the show is defined by four key industry sections; Interiors, Workplace, Kitchen & Bathrooms and Eco Design & Build. Uniquely, an entire section is dedicated to International Pavilions alongside a substantial platform for new designers within Emerging Brands.
Alongside a 60m-tunnel entrance, central bar, specially designed restaurant and auditorium, the show also features specially commissioned editorial hubs within each section of the show. Topped off by the critically acclaimed Talks with 100% Design programme running across the four days of the show, 100% Design is a diverse, inspirational design experience.
Exhibitors are carefully selected, reflecting the show’s focus on design quality, innovation and relevance to the architecture and design community. Used as an influential platform, the show saw over 1,000 new products launched at the show in 2013. These companies and products, alongside a comprehensive roster of the best media and specialist industry partners, contribute to make 100% Design an essential destination.

Interior Designers from across the globe, working on residential to hospitality, flocked to 100% Design to source ideas and product from the Kitchens and Bathrooms hall.

For the clean lines and colour scheme, and the interplay bewteen gloss and mat surfaces.

Not really, for the luck and bench space, clutter and enormous open areas that collect dust.

Posted by The Kitchen Designer at 11:21 AM